July 12, 2012 Comments Off on Black Mesa Danny and Alice Scott 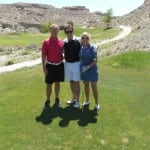 lbuquerque and a few minutes from Santa Fe airports, extraordinary golf traverses the sand canyon arroyos of Black Mesa. Indigo Buntings flash their bright blue wings across emerald fairways, and through the prairie brush. So serene, the only sound heard is the meadowlarks’ melody, except of course the screams of golfers for triumphant shots, including Danny’s first hole in one on number 11. The par 3 was playing 176 yards on a perfectly temperate day of a media trip. Danny fired the ball with his Piranha eight iron into the magnificent box canyon with towering cliffs. It hit the bank of the hillside next to the left side bunker, took a little bounce and rolled down to the hole. Hugging ensued with partners Leigh MacKay and son Mike Schieffer on the tee box. Danny was stunned.

Exaggerated elevation changes work out golfers’ hamstrings. The entire course is a contrast of ruggedness, snow capped distant mountains, imposing cliffs, gorges, scruff, blooms and of course the black mesa butte. Number 14 gives new meaning to “uphill climb.” Thread the needle in the fairway between bunkers and rugged terrain on the right and Eddie’s gorge along the left or you will see why they call this hole “the stairway to seven.” Don’t be yellow bellied like the meadowlarks. Read Tom’s Pro Tips for each hole to lessen your fears. Golf Director Tom Velarde and Principal 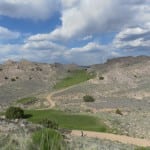 Eddie Peck are passionate about the course and area. Tom’s companions Putter, the dachshund and Skitty, the rescue dog have the course memorized, hitching a cart ride when needed. Tom’s ancestors from Spain settled the town of Velarde along the Rio Grande River flowing from Taos to Santa Fe and beyond. Dotted by vineyards and western movie ranches, rafters on the water have an exhilarating ride and view. Fly fishing reigns as a sport to abandon all stress of civilization when not golfing.

The Santa Claran Resort Casino is a good home base for golfing and touring. The Steakhouse menu is extensive with bold flavors and friendly service. Local Black Mesa wine pairings complete the culinary picture. There is more than meets the eye at Santa Claran with a gambling casino, bowling alley, 2 bars, restaurants, gift shops and workout facility. Artisans’ hand hewn appointments highlight the décor. A couple blocks away, the award winning Mexican restaurant El Paragua has been serving local flavors since 1958. 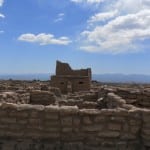 a week. Shuttles run to the Santa Fe Plaza where the cornerstone church of St. Francis was built in 1884 providing a sense of faith and peace while art galleries such as Georgia O’Keefe’s stir the creative senses.  For a spanning view of the plaza, climb to the balcony of Marble Brewery and Tap Room, prime real estate for people watching with home brewed tastings. Visitors come as you are but the resident dress code is western wear apparel including Cowboy/girl boots, the finest of which are offered in the local shops as well as everything turquoise. Native American artists sell their jewelry and art on the street and in the shops. The most impressive representation of authentic Native American heritage is at the Puye Cliff Dwelling tour. Hike alongside 70 rooms and petro glyphs on one level and ascend to the village of ruins atop where an underground kiva still stands. Submerge by ladder and imagine the tribal gatherings inside the adobe walls where historic 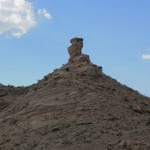 al decisions have been made. Current day prayer dances and sacred rituals take place on site.

Downtown Taos is a northern version of Santa Fe. Play the mixed private/public Taos Country Club where the fairways are lined by thick sage brush. Hit the fairways or forfeit balls and take the nickname Sagebrush Kid. Thick and deep, just hit another! Solano is the Big Boss here, a pretty little boxer dog lazing in the clubhouse. After the round, ride to the Rio Grande gorge and walk the suspension bridge for a stomach fluttering, mini Grand Canyon thrill, then head back to Black Mesa. The high country golf and low key friendly atmosphere will addict you like the chilies in their breakfast burritos. The 360 degrees of gorgeous scenery invents the new word panoramania. See for yourself at www.blackmesagolf.com and click on Video Tour for Tom’s personal review.