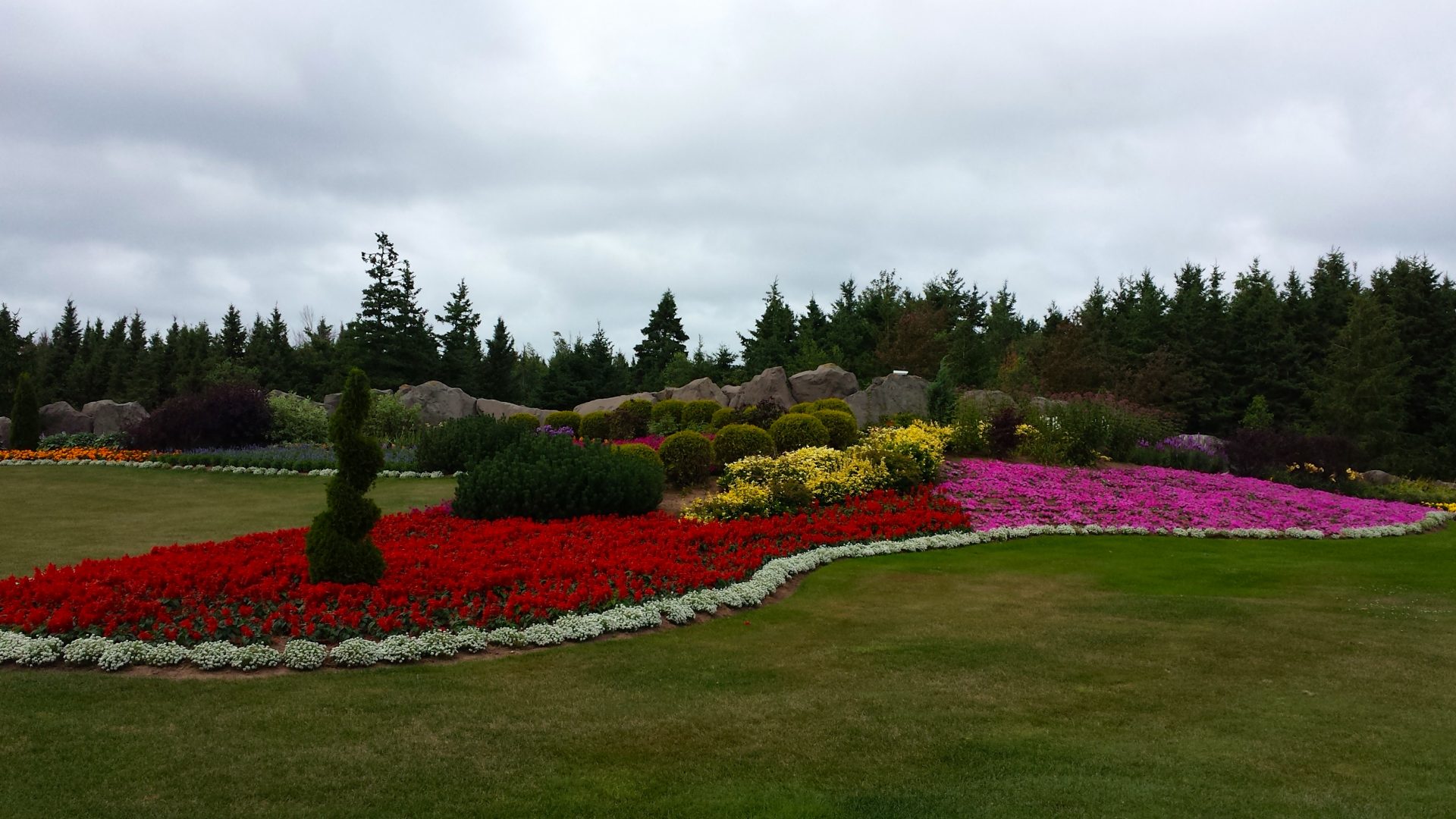 As the Ryder Cup plays out in Scotland, consider exploring the New Scotland on our side of the pond- Nova Scotia. We flew into Halifax and drove to Fox Harb’r, over the mountains, through many kilometers of sparsely populated forests where homesteads have firewood stacked beyond measure in preparation of winter. 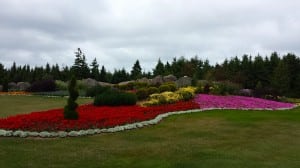 Summer however is a temperate beauty. We passed small towns; little churches, tall trees and porcupine road kill before reaching Wallace by the sea.  A long bridge traverses an inlet leading to the impressive gated Fox Harb’r Golf Resort & Spa. Sculptured deer stand as sentinels on mounded hills with a floral presentation to rival Busch Gardens that continues along the drive and throughout the resort. For a bird’s eye view, this is a special spot for jetsetters to literally fly in
on their personal planes. Signs on the golf course warn to watch for aircraft on the runway. They aren’t kidding. According to one bag attendant, a player was blown 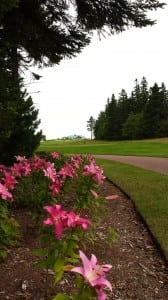 out of a bunker as a private jet took off. What about the possibility of striking a plane with a tee shot? Hopefully the golfer would not be liable for damage.

Fox Harb’r is a self-contained seaside entertainment center from golf to tennis courts, shooting range, fishing pond, spa, and fitness room plus hiking or biking on the Fox Trot trail along the ocean’s edge. Lodge accommodations have an outdoor covered patio overlooking fairways and sea beyond. On a cool rainy day like our visit, robes and slippers were appreciated for alternating between the patio and cozy fireside living room while watching the Valhalla race to the finish.  There is nothing sly about Fox Harb’r. It is straightforward beauty and pleasurable in and out. The sweet suites even have a heated tile floor in the bathroom. In the morning, heat up a pot of Tim Horton’s coffee – why not? Owner Ron Joyce was a founder of the restaurant chain with the dearly departed Tim. Ron parlayed some of his sales 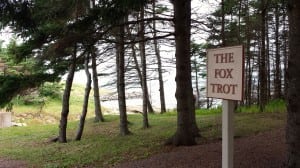 revenue into this playground for the rich.

The golf course is in pristine condition, fairways to greens. On number 11 there appeared to be a fox statue to scare off geese but oddly situated in a bunker until it ran out and down the fairway, a real live scamper. Hence well named, this course has many Kodak opportunities. If the golf shots aren’t stellar, no worries, the camera shots will be. The course winds around a lighthouse and past a marina at 14 with a pond below the green swallowing balls of golfers distracted by the full ocean view which continues with 15-17 parallel to the crashing waves. It is a series befitting of replay into eternity.

Pricey epicurean experiences might delight at the two restaurants or venture off premise, back into Wallace where an unpretentious mom and pop ice cream shop, McMahon’s serve salad and fresh lobster overlooking the water. The accompanying glass of wine tasted fine and an enquiry led to Jost Winery, a few
miles away. Their “Ceilidh” (a Gaelic kitchen party dance) leaves a wild taste in the mouth while “Trilogy” is similar to a cab franc and “Selkie” is sweet and sparkly. It 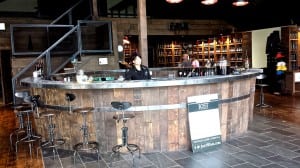 was “Four Skins” however that drew the attention of Jay Leno and a spot on his show, probably because of the name and somewhat phallic logo but it also tastes really good. The original owners left the wine business to start a brewery nearby. They sold to a couple from Newfoundland who put the region on the map with a new category “Tidal Bay” for which their white won a gold medal.

Continuing beyond the lavender farm, beach cottages, and over the causeway, the 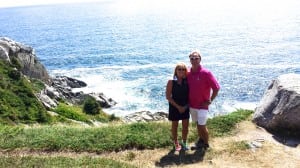 Cabot Trail begins. This roadway to the rugged high country reveals raw beauty between the divergent scenery of high capes and coves below cliffs. It is a descending and ascending panoramic puzzle of mountain plateaus, river canyons and the Gulf of St. Lawrence. Castle Rock, A Country Inn, is poignantly positioned on a cliff in Ingonish. Melt away any travel stress with a sprawling view of mountain, valley, and sea that rocks from the rocking chairs on the grass next to the deck of Avalon the Restaurant. Patio and indoor seating treat to the same sight and the fare is a real surprise with fantastic renditions of surf and/or turf plates. Owner Kim calls it seafood fusion with a Celtic twist.  Lobster spring rolls are light with just the right Thai spice and the beef we passed in the pasture was grilled to perfection.  Ask for a water front room to ensure quiet, privacy and yeah, astounding view.

Around the mountain, past the clamming beach, The Highlands Course is one of 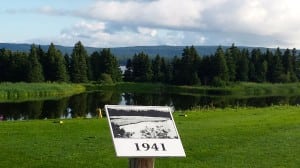 the first ocean and mountain courses built by Stanley Thompson. Each hole has a posted photo of the 1941 version. Its unfettered charm has stood the test of time. Hear the waves on number 5’s par 3 and if lucky, the grounds keeper might stop mowing to give a tip with his light Gaelic brogue. He said to save our batteries for 16 and 17. 16 appears like a mogul mountain with a green view of the bay. Cross the road for a steady climb up. This is not a residential section except to the bear and moose that were not on the loose. We did hit a goose but it heartily flew off. Fly fishermen 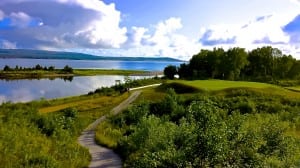 acrobatically cast in the streams pulling in trout.

Perched above Highlands is The Keltic Lodge, a popular place to stay. The cliff trail behind it is open to all for an exhilarating walk through the woods to the outer point of jagged granite cliffs and wild Atlantic waves crashing below.  Rest on a rock and take in the vast ocean scenery. Return on the outer loop and reward yourself with lunch and libation at the grill.

Continue on the Cabot Trail, with mountain and sea views, dotted with craft shops featuring all Scottish flair from pottery to Tartans and Treasures. Veer off to 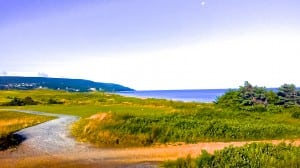 Inverness and the Cabot Links, one of the top 100 golf courses in the world. We like the digs at Cabot Lodge where rooms have a golf saying on the doors and floor to ceiling windows face the Links course and sea. Wifi, local and international calls are free. All the perfect basics are covered for golfing singles or couples or favorite buddy groups with 3 restaurants on premise. The upstairs Panorama restaurant is the perfect setting for a sunset dinner and a show starring fellow golfers playing out their round. It was reminiscent of a room view from the Russacks House in St. Andrews overlooking the 1st and last fairways of the Old Course but, here, the food is much better than Old Scotland, in fact it is delectable. The entertainment is in watching the approach of tired walkers to the 18th green that is tested by bunkers. Those who haven’t played it yet are aghast watching the pull carts dragged over the green, not knowing that is the instruction of the starter, after he gives you a bottle of water and a cookie with logoed ball markers. Cabot Links marries the serenity of ocean 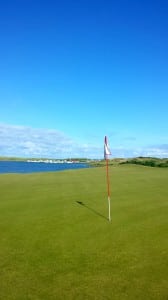 viewing with intense strategy and patience required. On number 14 a photo is taken and emailed free of charge – a nice memento indeed.

Soon a second thrilling course will be completed – Cabot Cliffs. Joe Robinson, director of golf operations was at Highlands for 39 years and is extremely excited about the addition in the works designed by the Coore & Crenshaw Golf team. Think Bandon and Royal Isabela merged. Golfers will see water from every hole. Gypsum rock outcrops naturally adorn along with a view of Marquerite Island when complete. The masterpiece hole at 190 yards will be one of the prettiest and toughest par 3s in the world. Golfers will tee up atop the ocean edge driving out over the cliff across the sea to a postage stamp target. PGA player Matt Kucher during a preview said he’d never thought he’d see a green that looked smaller than Cypress Point but this teeny target will be the mother test of all. A sand quarry is really a gold mine on site for filling the bunkers, saving millions between 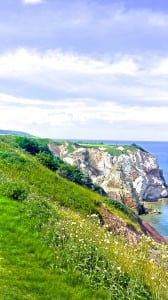 the 2 courses. Get up close and personal with sand by strolling the beach or boardwalk near the resort. The water is the warmest north of the Carolinas if you want to take a dip but beware the rip tides in season.

It wouldn’t be New Scotland without a single malt Scotch whisky distillery. Hail Glenora, just 10 minutes away for an educational tour and a tasting swig with and
without a “tipple of water” which tames the bite. Single refers to the single grain and the single mash, which begins the process, the same as for beer. Follow the steps through the rolling boil in the still and vapor state into the condenser, chilling again into liquid. From the start with the “Holy pond” water to the Douglas Fir barrels which have no flavor imparted in the aging process, the malt becomes scotch, taking on the color of the barrels. Tour guide Terry MacDonald explained the life of a barrel that may serve as a valiant vessel for several types of spirits, beer, wine and whisky before the final indignity of becoming a planter. He also advises serving single malt at room temperature, never with ice.  The stills run 7

days a week, barreling on Thursdays.

Throughout Nova Scotia, people are friendly and talkative. Accents are not as thick
as in Old Scotland so you can easily understand their bit of a lilt and may pick it up by the time you leave, a lovely, happy lilt. A nice departure is via Pictou, the birthplace of New Scotland, worth a quick walking tour before taking the ferry to PEI for more great golf and island culture that awards it the greatest golf destination in Canada. You might even see a whale breaching as we did on the way. For New Scotland info  – www.novascotia.com