Race to Saratoga for Fall Golf 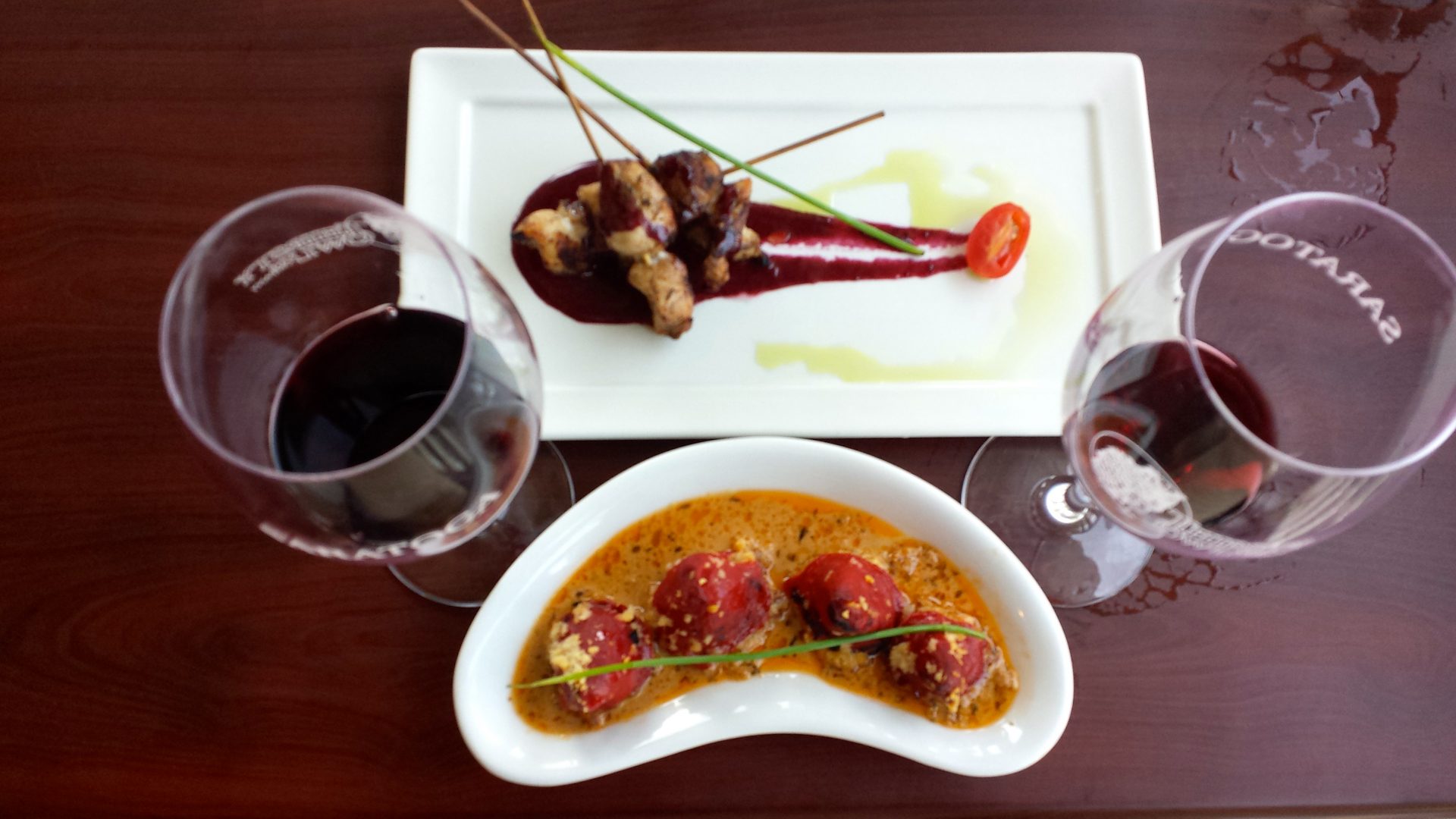 Race to Saratoga for Fall Golf

October 13, 2013 Comments Off on Race to Saratoga for Fall Golf Danny and Alice Scott 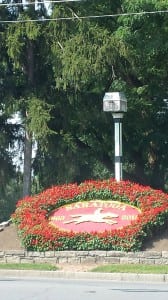 We’re off and pacing in Saratoga, home of the oldest operating sports venue – the Saratoga Race track. Celebrating 150 years, it is like none other. The complex has an elegant carnival, (not an oxymoron) flair with the main grandstand surrounded by a picnic area with live racing on screens. Families can carry their food and drinks in and enjoy the festivities for a mere $3 entry fee as horses are paraded from the paddocks. While the race season has ended, the tourist season is never ending in Saratoga and fall is a perfect time to see it.

Line up at any gate to the city of Saratoga, perhaps where people line up for coffee and bagels at the Uncommon Grounds. This name could apply to the region with so many unique places to explore, beyond the track. While downtown, enjoy art galleries, boutiques and restaurants galore, each with a different theme. The Visitor’s Center offers an overview of the history, sites to see and the importance of the springs. Saratoga Springs is so named for the mineral rivers below the surface that were hailed as healing fluid for which sojourners still flock on a regular basis. The best spot to experience this is at the Roosevelt Baths and Spa over the original Lincoln baths.  Don a robe and relax by the wall of water until called to a private room where the spring water has been drawn in a sunken bathtub. Odorless except for a salty tinge, oxygenation creates a rusty hue. Buoyancy is 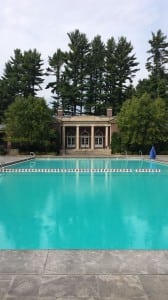 not the same as seawater so if you are short, request a stool to rest your feet and “float.” Every little movement causes a fizz of bubbles, effervescent fun. All that is lacking is the rubber ducky. For the ultimate therapy, schedule a massage after the bath. Oils hydrate and muscles unwind in private or couples rooms. Ahhhh, there is no better place to be when the thunder is pounding and rain falling. Former intuition to stay out of water in case of lightning is refuted because there is so much cement under the flooring – it serves as a bomb shelter. Good to know.

The Roosevelt Baths and Spa is in the Saratoga Spa State Park, run by the Gideon Putnam Resort. Putnam was a visionary of the early 1800s, building the area around the springs draw. Competition came along and lodging options are many today but the Gideon Putnam stands out in the park setting with bikes lined up outside to grab and ride the trails. The history

unfolds on the mural walls with story plaques. The staff is Ritz like, knowing your name as they greet in the hall.  A ready shuttle transports a few minutes into town. We loved the ambience and Italian cuisine at Wheatfield’s on Broadway. The pastas pair with gourmet proteins topped off with sinful desserts as the well-heeled locals celebrate the end of a workday in the bar. The crème brulee sampling of raspberry, vanilla and mango passed our “Oui, oui, oui test all the way home” or should we say the quarter mile turn.

The Saratoga Spa Golf course within the State Park is a well-maintained pristine setting. It is for this reason and the affordability that New England Golf Monthly 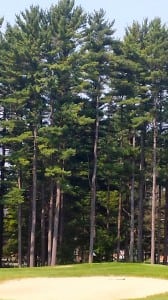 readers Mike Civitello, Sal Scafarrello, Sal Bonito and Art Martorello, have returned from Connecticut for 25 years to play. Their buddy trip covers other courses but they love Saratoga Spa the most. It was built by a German doctor with a flatter terrain than some because he thought if you walked from the Avenue Pines to the course and then walked and played 18 holes, it would provide the optimal amount of exertion to derive maximum benefits of the mineral baths after. Flat or not, the layout is enticing and the staff is a friendly bunch, beginning and ending with Norman the greeter who also cleans and loads the clubs. Jim, the starter joined the team 13 years ago, the day after he retired and tries to get as many rounds in as he can with practically all new joints to propel him. He takes pride in maintaining a good pace of play.

While birds of prey swoon in and out of the tall pines at Saratoga Spa, aircraft zoom on and off the runway next to holes 2 and 8 at Airway Meadows Golf Course. This place is a story in itself, built by the owners Don and Joan around 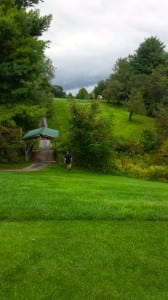 the family airstrip. An excavator by trade, Don assisted in building a Tiger Woods course and was intrigued by the opportunity. He would come home at night and build his case about how many golfers were showing up and why not show up for them if they built a course? As with most American Dreamers who pursue their entrepreneurial quests, reality dishes up challenges like economic downturns. Joan recalls signing for the loan when their attorney quipped, “Joan, you won’t be able to take a side job to cover this payment.” It is likely too hefty for that and she wouldn’t have time anyway, putting in 12 hours a day. Don still excavates on the 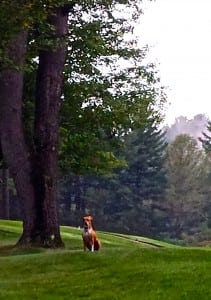 outside but he couldn’t have built a better office for the family. Their son is the superintendent, mowing early as Lexi, his dog trees a squirrel along the fairway. This course has more character than a movie director could ask for. Covered bridges with famous names, like Golden Gate, Brooklyn and London carry carts over streams.  Biplanes and skydivers entertain on a clear day. Before leaving the pro shop, Joan said in a five minute span, “It’s hilly” four times. Yes, it is a hilly dilly; don’t miss this one, 20 minutes outside of Saratoga Springs close to the 90 Thruway.

The premier course in the area is Saratoga National, close to the Race Track. The grand entrance leads to the world-class clubhouse, home to the award winning Prime restaurant, which has a Sunday live jazz brunch year round. A colorful horse sculpture surrounded by flowers links the shop to the infinity pool. The luxurious setting makes it a popular wedding venue. The beautiful layout of 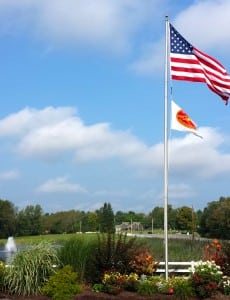 the course draws tournament events. It is a target course with lots of carry; especially on number four, a long par 5 with vast marshlands preceding the landing area. Fifteen has an island green on a lonely lake, likely full of missing balls. There is no racing to the finish line at Saratoga National. Strategic thinking is imperative for a decent score and the scenery is meant for slow absorption. Fall is a glorious show of brilliant maple leaves throughout Saratoga. Embrace the Race and go now. Visit www.saratoga.org