December 19, 2018 Comments Off on Tantalizing Tahoe Danny and Alice Scott

For a dust free, cool escape, the Reno/Tahoe area is tantalizing and close by air or drivable through historic mining towns. Here is a circular sampling of Tahoe’s total scene. Reno is filled with river front entertainment from Diamondbacks’ Triple A Aces to casinos and concerts. There is always a festival, like Street Vibes with live music and vendors. Mark Conn, formerly with the Wigwam Resort, is the Business Director of Golf Services with El Dorado, Silverado and Circus Circus, all on the strip with stay and play golf packages. The Peppermill Resort Casino down the street almost looks like it is trying too hard to appear like the Bellagio in Vegas, but it really works. Somersett Golf and Country Club has a Tom Kite design on the northwest slopes of Reno. Kite takes the game to new heights with elevation elation. While the club is private, pro to pro arrangements may be made. Public options with panoramic views are Wolf Run, Wild Creek and Lakeridge with an island green.
In Carson Valley a Coore-Crenshaw mountain retreat called Clear Creek is sure to become a favorite fresh air forested golf community, with views of the Carson Valley below and the Heavenly Valley Ski area above. Genoa Lakes in the green valley has two courses with a river running through. Since Carson City is the capital of Nevada a full history awaits at the museum and Pink House. Explore Carson Valley from a glider plane or learn to focus your lens with the Wildlife Photography Tour.
On the south shore of Lake Tahoe, Edgewood Golf Course is celebrating its 50th year. The American Century Celebrity golf tournament is televised here in July with sports and entertainment celebs competing and carrying on while partyers on boats complement the land galleries. Edgewood removed the most expensive parking lot along the shore to enhance the new Lodge landscape and redesigned number nine where you tee off in California and putt in Nevada. Now 9, 17 and 18 all skirt the edge of the multifaceted Lake Tahoe with lapping waves. One spectacular facet of the lake is Emerald Bay. Drive cautiously up the narrow curves with cliff drop offs on both sides (guard rails not included), to view the colorful water below. Park and hike or snap your shots and go.
If gaming is your sport, stay at Montbleu Casino and Spa, Harrah’s or Hard Rock on Stateline Highway with lake views and top musical performances. Walk to shops and restaurants or get a bird’s eye view riding the gondola to the ski mountain where summer activities include a zipline.
Along the eastern shore of Lake Tahoe, Sand Harbor is a cool stop with beaches, boardwalks, educational center and café/bar for fish tacos and rum runners while watching the boats float by. The sailboat of Incline Village called us to the north shore to play their two courses and stay at the Hyatt Regency for a window seat view of the lake.
Truckee is next up, famous for the winter tragedy of the Donner Family, an area reflecting extremes. Golf is no exception. Coyote Moon is pure adrenaline golf where you get lost in the scenery and namesake coyotes have a den near the 12th green. Another alpine delight is Schaffer’s Mill, up and down, around unobtrusive, upscale homes on the front nine with ponderosa pines and ponds on a natural back nine. Historic, eclectic lodging in Truckee might include a clawfoot bathtub while Donner Lake Village delivers knockout balcony views over the beach and dock. While kayaking it seemed that the snow was melting off the mountains flake by flake as mergansers (Trump head ducks) paddled by.

To the north, former Arizona Open winner Van Batchelder is the director at Grizzly Ranch Golf Resort, playing in his cowboy hat and boots. Emerald fairways are lined by dainty blue flax blossoms, yellow mule ears and purple lupines in June. Deer prance from the woods. One of the most beautiful and difficult closing holes includes a lake, covered bridge and cascading waterfalls. Nearby, the impressive Nakoma Resort is a Frank Lloyd Wright design. Not to be outdone by the famous architect, Robin Nelson created the Dragon Course, perched above the wild and scenic Feather River. You might believe that you were fighting a samurai, after playing.
Departing at sunrise, we were tantalized by a cinnamon bear lumbering across the road – the perfect ending for a Tahoe trip. 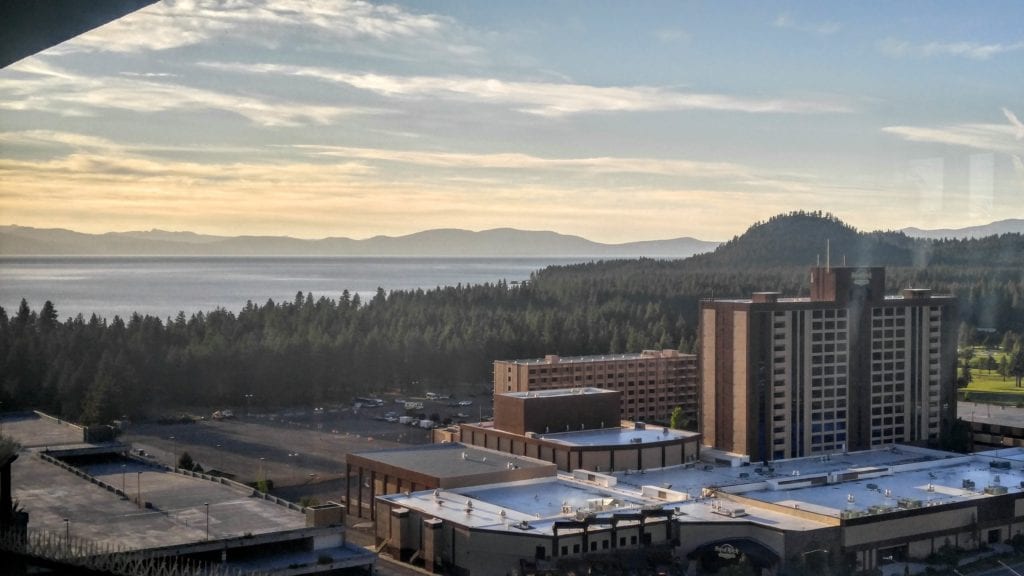