April 18, 2012 Comments Off on Tubac Golf Resort and Spa Danny and Alice Scott 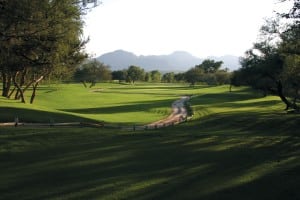 Otero Ranch, the first Spanish land grant in the southwest, was creatively transformed yet preserved as the Tubac Golf Resort. If the king of Spain had visited, he never would have released it. Made famous first by Bing Crosby’s purchase and later by the movie Tin Cup, starring Kevin Costner and Renee Russo, the resort was a favorite of the Duke, John Wayne and now a favorite of ours.

Rambling through the ranch brings peace and tranquility to the game like never before. The small but sustaining Santa Cruz River meanders through the course amidst the cottonwoods and mesquites, home to an abundance of feathered friends that summon birders with binocs from around the globe. 27 holes of championship golf traverse the Santa Cruz River valley, with three separate nines, named Anza, Otero and Rancho. The Otero course starts with a gorgeous view that sets the high standard of beauty and playability.

Hole #8, Otero, par 3, 185 yards – This is a grip it and “ribbit” hole that requires a long carry over the picture perfect pond with lily pads for floating frogs.  Surrounded by tall cottonwoods and protected by bunkers, this green also demands a target tee shot, so don’t be distracted for long by the beauty of the scenery.

Hole #9, Otero, par 4, 315 yards – Step up to the plate and hit it straight. The green has a lot of water in the front and all along the left side. Added bunkers result in a very narrow landing strip. All the greens are silky smooth for speedy putts over gentle slopes.

Rancho is an even prettier nine, in the most authentically natural setting. Although it was named after Rancho Manana because the same Allred family owns both, it obviously reflects the original cattle ranch. The first fairway was shared by a cow chewing it’s cud alongside its calf. Any golfer whose ball lands on a cow pie on the starting hole may refer to the local rule printed on the scorecard stating, “Ball landing on cow pie: pick, lick, and place no closer to the hole”.

Hole #4, Rancho, par 5, 568 yards – Pictured here, it is one of the most famous holes in golf, thanks to the Tin cup scene where Kevin Costner was caddying for Don Johnson. Also with them were the likes of Peter Kostis, Gary McCord, Craig Stadler and a young Phil Mickelson. Stand where they stood on the tee and fire away to the corner. Consider the water hazard in front of the green to determine your best approach shot. Layup safely or go for the eagle.

Hole #8, Rancho, par 5, 651 yards – Titled the train wreck because the tracks run alongside and because it is a collision course to maneuver. The longest fairway at the resort combines bunkers, a lake in front of the green and a gigantic cottonwood in the right middle for the ultimate par challenge.

More than just golf, the resort offers an extensive spa menu, salon services, pool and Jacuzzi. If you are planning a wedding, let the bells ring in their chapel with Spanish mission charm.

The Stables restaurant is aptly named since it once housed the horses of yester year.  Step across the original 200 year stone floor to a table with a view of the lush course set in the forest of cottonwoods and mesquites. Viewing from the other direction are cattle, which roam the first fairway of the Rancho course and along the practice range. The dairy barn with two grain silos still stands but as an elegant furniture and accessory shop.

Stay and play in one of the well appointed casitas or haciendas. A little chipping course amidst the casitas is an added bonus and especially fun at night.   It is ideal for a romantic getaway or any type of vacation or large conference. The food is unsurpassed. Search the world over and you won’t find a more peaceful, pastoral layout. We are so fortunate to be able to drive there on a whim.