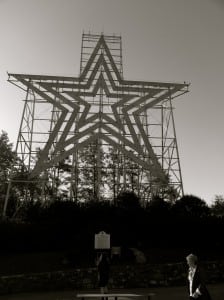 Yes, blue are the ridges of the mountains against the horizon until the sun shines bright in the peak leaf season of October when they burst into a kaleidoscopic palette. Roanoke is the heart of the region where boredom has been stricken from the dictionary. When a hospitality career leads to partnering with the likes of Steve Winn the possibilities are endless. Once in charge of his private jet, Cindy Hummer decided to go home to Virginia’s Blue Ridge where she met her husband Keith and together created the distinguished Inn at Campbell, recently certified in the Select Registry. Dramatic architecture in a downtown loft merges eclectic art, antique furniture (including her family heirloom Grandfather clock) with modern kitchen and bath facilities. Breakfast is served at the kitchen counter in robes with other guests or in the privacy of your room. Gather again for wine and gourmet cheese before heading out to dinner. The reasonable rates will astound you for the exquisite habitat.  If rooms are all booked or you are averse to stair climbing, the Roanoke Hotel in the national registry of historic places has over 300 rooms and suites in an elegant warm setting, perched on the hill and famous for peanut soup and spoonbread. It was the launch pad for rail passengers back in the day of Norfolk and Western later merging into Norfolk and Southern. The whistles still blow as the tracks carry cargo but the station was preserved in a conversion to the very impressive visit

ors’ center. The entire downtown area gives new meaning to the word revitalization as the community has pitched in to the Urban Renewal projects. Everything is in walking distance but if your dogs are tired or you want a fun ride, try the trolley or the free shuttle cab. The ’67 Checker airbus is a limo crossed with a 50’s diner and an entertaining cabbie providing historical facts and trivia questions. It’s a bit of cash cab without the prizes. For budget conscious accommodations and complimentary shuttle downtown, the Holiday Inn at Tanglewood is clean and comfy with free WIFI, flat screens, and the Elephant Walk restaurant and bar. Just 2 miles off the highway, this is a great spot to call home between golf and touring.

Golf options are widespread in the region. Annually voted the best golf course to play in the Roanoke valley and one of our favorites is Hanging Rock in Salem. There is a sense that the designer and public have merged into a lasting relationship. Carved into the hillsides of Fort Lewis Mountain, the course challenges players to numerous elevation changes with sweeping fairways blanketed by maples, pines, and oaks. The first hole sets the stage with a gazebo overlooking the practice range, clubhouse, a 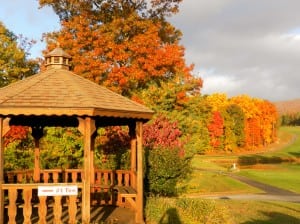 nd both first and tenth fairways. Breathe deeply and embark on a wooded wonderland adventure that includes deer, turkey and maybe a bear?  On #10 launch your drive over the lake to a generous landing area that narrows as it climbs into the hillside of this demanding 500-yard par 5. A steady climb along the ridge slowly begins to descend back toward the clubhouse with the risk/reward #14. Players must make a decision between two separate green options that offer equally difficult and demanding second shots. Your strategy begins on the tee box with which green you challenge. A mid iron to a landing area goes for a green surrounded by water on three sides or blast away to an uphill two tiered green that slopes back to front. The views of the Blue Ridge Mountains make this a must play when visiting the area.

Back to Roanoke for dinner, the Fork Restaurants offer assorted cuisine at four locations around town.  Their outdoor café is a most pleasant spot for people watching with your favorite glass and grub. For finer dining, climb the paved hill to Carlos Brazilian restaurant with 180-degree window view of the city and ridge beyond. A wide variety of surf or turf dishes are succulently prepared and graciously presented. A nightcap at the hotel lounge introduces travelers to locals from anywhere and everywhere, all happily concluding their Blue Ridge Day.

Before the second day round try a hearty breakfast at The Roanoker, famous for their world winning biscuits since ’41, appearing in Southern Living’s “Off the Eaten Path” book and featured on the Today Show. All fueled, head to Smith Mountain Lake for more gorgeous views and a round at The Westlake, rustling through the leaves as the trees disrobe along the way. It feels like the top of the world with occasional fine homes perched for angled views. Don’t miss the peeks of Smith Mountain Lake and the peaks of the Blue Ridge Mountain as you tackle the course. In the fairway of number eight, a mileage marker reads “In your Dreams.“ Around the bend is a 100-foot drop to the green wher 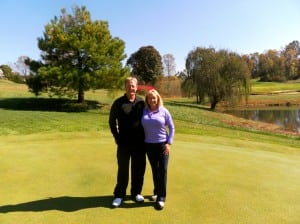 e balls play hide and seek. Members like Don Webber, who has played the game for 68 years, chase the ball all winter long. He says, “If the flag stick is frozen we just hit it close and go on.”  He methodically tracks every round for his handicap, role modeling after his mom who was the Virginia State Champion. Number 17 is a spectacle in the summer with azaleas surrounding the green decked in a semi circular backdrop of woven railroad ties. This is the “advertising hole” which Don notes, “takes a pretty good lick to get up the doggone hill.”

Big Lick was the original name for Roanoke because of the salt licks, just like French Lick in Indiana. Roanoke is the Indian name meaning the same but sounding prettier. Now it is also known as the Star City as evidenced by the largest star sculpture overlooking the city. The mayor explains, “We are all reaching for the stars here.” During the filming of “Lake Effects”, Hollywood star Jane   Seymour claimed it to be one of the prettiest places on the planet. Other producers agree since Ellen Burstyn, Josh Lucas and McKenzie Foy are currently in town filming “Wish You Were Here.”

Star in your own scene at another course like Ashley Plantation with all brick homes averaging $350k and paying a mere $2200 in taxes. Landscaping is very reasonable as well considering most of it is borrowed by the view of the Blue Ridge Mountains. You can’t visit the Blue Ridge valley without hea 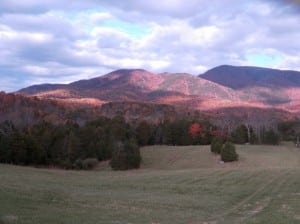 ring some Blue Grass music and there is no better place than on Saturday night at the Blue Ridge winery. It is a long dirt road drive to a vineyard, wide-open field looking out to the mountains sprinkled with color. A vine covered arbor leads to the quaint little tasting room where the cabernet will surprise you. Barbeque is brought in and the band starts up as people flock with their blankets. It can get cold in them thar hills. Logan the bear is known for crossing here time to time. His photo stands as proof. En route we learned that a disbelieving delayed shriek of, “That was a bear!” at 55 miles per hour past heavy woods is not enough time to really share that bear, leaving one person in the group longing for Logan to meander across the meadow. Maybe next trip to Roanoke when we check out more courses!