November 1, 2012 Comments Off on Texas Hill Country is Tops Danny and Alice Scott 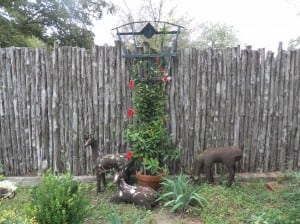 Rediscover America as the Germans did in the 1800s but with all modern day conveniences in Fredericksburg, Texas. This destination is the whole package of rich heritage, historical charm, outdoor adventure, shops, wineries, brewery, spas, scenic views and The Lady Bird Johnson Municipal Golf Course.

A drive to the Boot Ranch Golf Club is merited just to check out the digs. Don’t ask to play unless you want to pony up the big bucks for a premier home and membership in the elite club. “Seven Days of Utopia” was filmed here, aptly representing the way of life. If you have the means you may be tempted and having played it ourselves, we can say it is one of the very few courses that would not be boring with repeated or daily play. For those without the means but the desire, there is always the hope that the ownership may succumb someday as many private courses have to offer it part time to the public. Don’t hold your breath. Meanwhile, Alan Wooley is in charge of an incredible municipal course with plenty of Hill Country views and the best doggone burgers in Texas. Sue takes pride in her homemade salsa that won first prize at the state fair several years in a row. She also makes a mean sangria and a peach cobbler like mama.

Over 20 million dollars have gone into the renovation of this course, once nine holes, now a challenging 18 with plenty of views transitioning from Cattle pasture to Hill country that marry the Serengeti with Southwest Spain. You might expect a wildebeest but you are almost certain to see the mule deer and maybe the sika that resemble a small moose body with elk antlers. Still a work in progress, the course is in great shape with some very significant holes dueling over signature status. Number six is one of them with split options for tee boxes on a short par three that allow it to be played as two distinct holes in one, where Danny almost did get one with a drive six inches from the cup. Boot Ranch authorities agreed with Alan as everyone does that this is a hole that could serve as signature of any course in Texas. Number seven is a drivable par 4 from every tee box, though few make it in their first round. Another short par 3 vying for signature is 16 with a lake right side that comes into play even when you land on the right edge of the green. Alan says, “This one has a pucker factor.”

Wherever we go, we like to learn a little of the local language. Danny had a leg up on the Okie and Texan talk of our golfing partners but Alice discovered the ball’s nickname is honey. And when sweet-talking that honey doesn’t work, we say things like “dag nab it” and “bull crappy. ” It’s like golfing with the Real McCoy or Dad AB.

The Lady Bird Johnson Park has tennis, swimming and is right around the corner from the airstrip and the Hanger Hotel. This is retro fitted to the nostalgic era of World War II with incredible attention to the motif details. Airplane props serve as ceiling fans, bomber jacket leather upholster the chairs. The diner is just like the ones veterans came home to where current military eat free. Behind is a 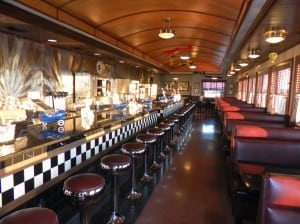 conference center that holds USO dances. It is a romantic notion with funds benevolently donated to Ft. Hood. For transportation, if you haven’t driven in, there is the motor pool equipped with a limo or cabs. Many fly in with their single or twin prop engines, sometimes for the $100 burger. The burger is $5 but the flight fuel costs $95.  The admiral club serves the brews, wine, or timeless cocktails like vodka gimlets. Owners Dick and Rosemary Estenson have been a team for 40 years and they obviously bring out the best of one another’s passions converting them into entrepreneurial successes that are community oriented and visitor endearing.

Convention Visitors Bureau chief, Ernie says, “If you want a town that is still a town, Fredericksburg is it. It is not a city bedroom yet still so close to San Antonio and Austin when you want the big city fix.”  They have two great airports for direct or quick connecting flights too. With a population of just 10,000, the hamlet doubles on the weekends due to influx of visitors. In the early days, people came for the peaches. They still do but now spend time exploring more than 360 unique shops, 20 wineries 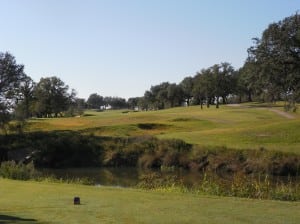 and museums including the remarkable World War II Museum, and art galleries galore. The downtown strip is a glimpse of the old west. The German settlers originally purchased land grants that included many acres of farmland plus a couple acres in town to build their “Sunday Houses.” The heritage holds with German restaurants such as Der Lindenbaum and high German is still spoken in the bakery.  Stop in for an apple strudel and say, “Guten Morgan.” For Tex Mex food that is the bomb, try Bejas Grill and Cantina with patio seating to watch the passers by. Famous for wildflowers, care is given to the horticulture in the plaza and region wide, but nowhere with more passion and love for the art of gardening than at the Fredericksburg Herb Farm where we had the honor of staying in one of their replica Sunday Houses, a comfy cottage with rockers and porch swings.  The spa is a real treat. Don’t expect a steam room or Jacuzzi but the essential oils are concocted on premise, the surroundings serene and the massage from Susanna worked out unknown kinks leaving a sense of delirium.

For another such sense, the Fredericksburg Brewery is the oldest in the state of Texas. Owner Dick’s favorite – depends on which is in his hand. We liked the “Not So Dumb Blonde Ale” and felt smarter after the first sip. Due to regulations, they cannot take a beer down and sell it outside the brewery but you can buy one and take it down the street in glass or growler. Just don’t jaywalk. That is a serious traffic hazard and revenue target by the police. Also make note that it is illegal to shoot an Indian after 6 pm. It is particularly odd that this law remains on the books, since the founder of Fredericksburg is memorialized with a statue in the park handing a peace pipe to a Comanche chief symbolizing the only treaty in the US that was supposedly unbroken. There is no way to fact check this in our lifetime.  To purchase your own bronze statue, stop in the John Bennett gallery where he is usually present with his dog Buddy and wife Cathy who greets you with a glass of Becker wine – hopefully the cabernet.

You can’t go to Fredericksburg without going to Luckenbach, made famous by Waylon Jennings’s song. Unlike everything else in Texas, it is not very big size wise but it is BIG on history and experience. Enter the wooden building for an 1800 view of the Post Office in the first six feet, then the general store full of antiquities and logoed memorabilia, then step into the tiny saloon for beer or wine. Out the back door, Ben Beckendorf still plays his guitar, singing with anyone who wants to join in with their instrument or vocals as he has done for 42 years. See, he and his Dad were 2 of the 3 populations when Hondo bought th 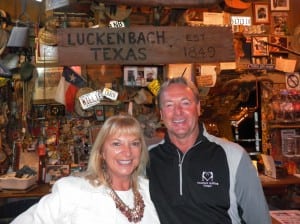 e town. Live music 7 days a week with big guys coming in to play on the weekends for a maximum of 2500 in the audience makes this an intimate ho down under the stars with chickens perched in trees and antlers hung on walls. Abbey organized the Guinness World Book of Record outing with over 1800 people in Luchenbach tee shirts strumming and singing the famous song. It was an emotional day with so many music lovers remembering all their loved ones lost but still making a memorial history of their own. The saying goes, “Everybody’s somebody in Luchenbach.” Visit the Hill country of Fredericksburg and find out for yourself.