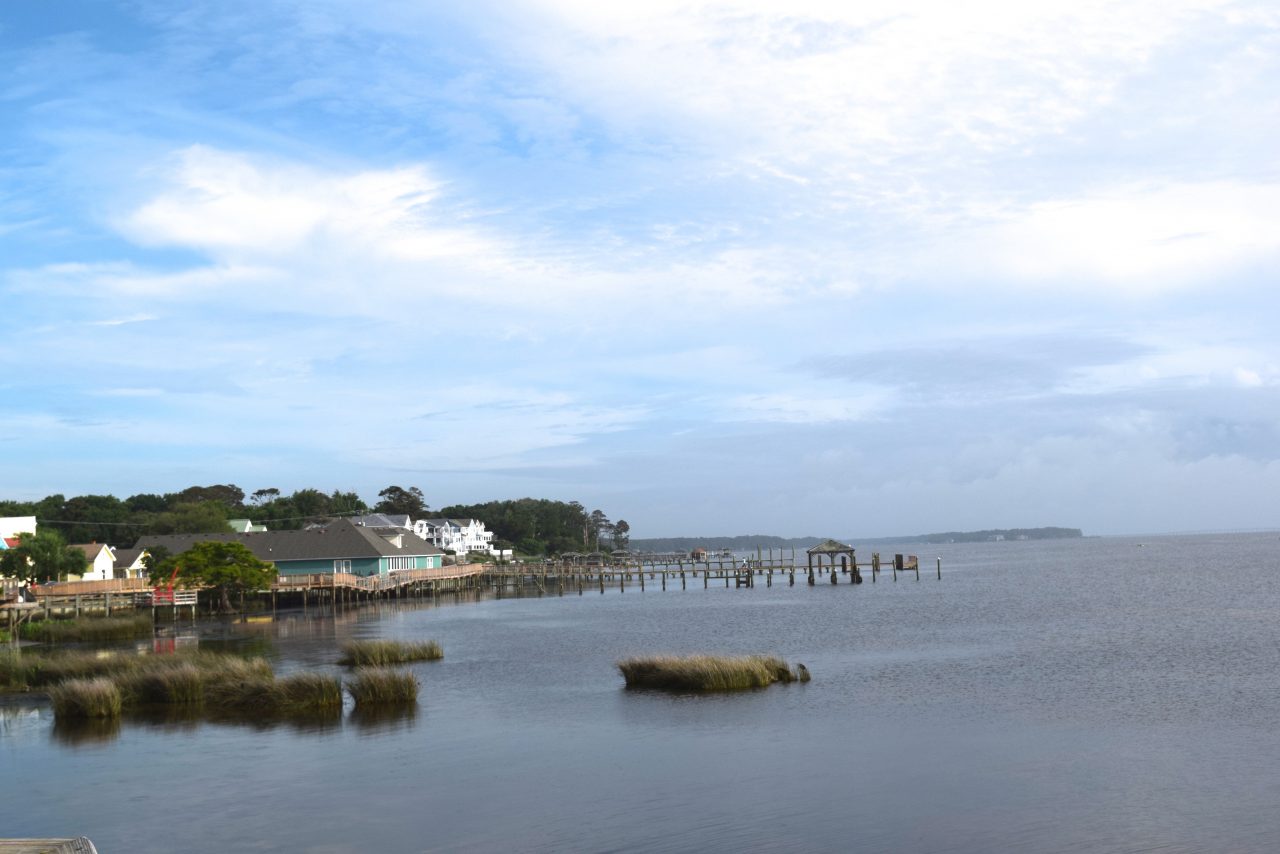 August 18, 2015 Comments Off on Carolina Chapters – The Outer Banks Danny and Alice Scott

Bring your clubs; you may need them to club a shark. Seriously, our take on the 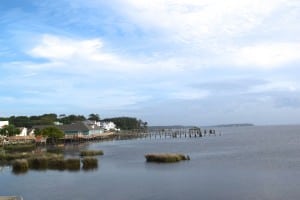 shark buzz is that it’s the ocean silly, you’ll have sharks. And yes, on rare occasions they bite and jellyfish sting but play tag with social media and there is an eating frenzy. Did you know that statistically cows kill more people (55) than any other animal per year? We saw no sharks, nor cows while in the Outer Banks (OBX). We did however see the magnificent wild horses -thoroughbred Spanish 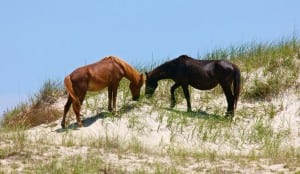 Mustangs that arrived as early as 1521. Texas A& M verified that the DNA of the herd leads to one female lineage. Since there are no longer any left in Spain, they are an endangered species, well protected yet roaming free in OBX. They were moved in ‘95 to 774 acres on the sound side in Corolla (pronounced with a soft second o, not like the car). Corolla comes from the Cherokee native tongue, meaning center of flower. Rain or shine Hummers load up 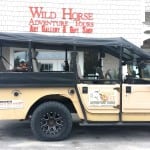 for beach runs at Wild Horse Adventure Tours . If you go and it looks like even a hint of
rain, insist on a poncho. During a torrential downpour on our tour, the only thing not dampened was our spirits. The only smarties aboard were the Hungarian couple that bought a motorbike here and return every year to tour the country. Their rain gear was heavy duty. Our light gear was in our golf bags. The horses didn’t seem to mind. We always say the most memorable golf is played in the rain; perhaps it goes for horse tours too.

Reach the Outer Banks from North Carolina and points south by crossing Alligator River and be welcomed to Dare County. The more traveled northern route crosses the Wright Brothers Bridge onto the barrier island. Take the dare to balance all the island activities with rounds of golf at 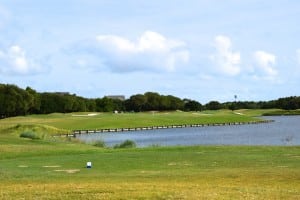 several standout courses. The upscale Currituck Golf by Rees Jones is easily accessible on Hwy 12 between Duck and Corolla. It is a turtle haven with little ramps for easy in and out of ponds along the fairways. The Audubon aesthetics help ramp up your game with the Currituck Sound and Atlantic Ocean in view during your round. 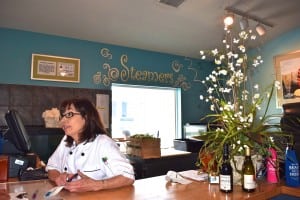 Steamers with a WOW factor for 21 years. What other fresh seafood shop do you enter and say, “Wow this smells great!?” They sell and prepare all kinds of fresh seafood with cool employees and hot steamer pots to go for family beach getaways or no muss, no fuss on the deck meals. The portable pots idea stemmed from the Clam Celebration, which ships from New England. Steamers also provide personal chef services. Their lobster and shrimp bisque is truly packed 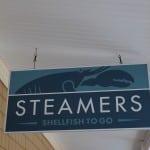 with meat and spiced just right, well paired with the Weeping Willow Wit by Mother Earth Brewing or a bottle of wine. Oysters are Wow. Soft shell Crabs are Wow. The fresh fish sandwich changes daily depending on the catch. The grilled flounder was delish on BIG crusty bread. Key lime pie and NY cheesecake, again both WOW. “Steamers will stay in OBX because it is less commercial; less crowded, more laid back and has better value rentals than Myrtle Beach or Hilton Head.” They will however be moving to Southern Shores in October so visit them 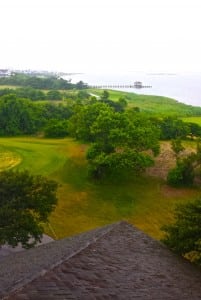 Nags Head Golf Links is the OBX course furthest south along the main road, absent of horses but a true rabbit habitat.  Short target golf is the name of architect Bob Moore’s game and Golf Digest touts it as being among the longest 6,100 yard courses around. Nags Head numbers 5, 14, and 15 along the water deliver the music of the sound, making it a sound decision for coastal golf. Towering above the clubhouse, climb 2 cases of wooden stairs for a knock out view of the Roanoke sound.

Jeff Lewis, formerly from Nags Head is a short distance away at Kilmarlic Golf Club on the mainland, in Powells Point. Designed by Tom Steele, water features seem to be the main point on 15 of the holes. A four-bedroom golf cottage is situated next to the clubhouse, an ideal stay-and-play golf option for groups. In the same town just across the highway, at the end of Hibbidy Dibbidy Lane, The Pointe Golf Club is wide open and a local favorite. The 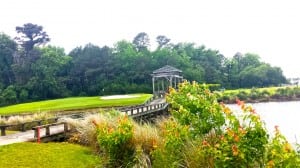 signature hole is reached over a wooden bridge with gazebo cover.

Across the Wright Brothers Bridge, back on the island, the town of Duck is the center of it all. We say Duck trumps sharks. We’re not talking Donald, neither Donald Duck nor Donald Trump. This Duck is two faced, by water that is, on the east the cool Atlantic, on the west, the sounds. This means both a 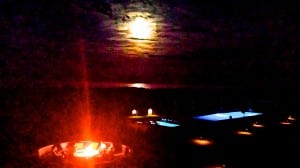 sunrise and sunset view at the Sanderling Resort, the spot for people who want their ducks in a row or decide as you go. A ten degrees difference between beach and balcony side in the evening gives guests a choice in comfort.  Cozy reading rooms with nautical furniture and open window views face each direction on the upper level of the beach house above the lobby bar. Play a game, share a cocktail; ignore the rain and look for the rainbow. Or head to the spa or indoor heated swimming pool. Outside, the tranquility pool & spa is for adults only. Sweet dreams candy with a

card of facts on activities, tide and sunrise/set times and weather so you can decide whether to hit the water, hit the links, visit Kitty Hawk or lighthouses. A smore’s package is provided for roasting on the evening fire pit, live music entertaining. The sandy dunes along the beach are open to all, plus dogs and dolphins.  Other activities on the Schedule of Events include complimentary touch tank (the NC Aquarium on Roanoke Island brings friends from the ocean to touch), 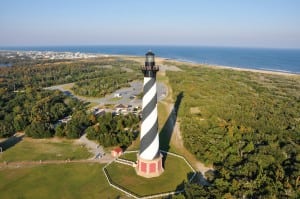 yoga on the beach and surf lessons on the ocean side or kayak tours on the sound side for an extra charge. Standup paddleboards and bikes are for rent at the activity center. The Lifesaving Station Restaurant really was one in the day and pays tribute to the heroics of yesteryear while serving chowder that can be a whole meal for a deal. A splurge on the land and sea main courses along with the breakfast biscuits are well worth the weighty points. Sanderling Resort in Duck, on the Outer Banks of North Carolina is the place to rediscover your inner child. www.sanderling-resort.com

Nancy Caviness and Donna Black rediscovered their adult selves in Duck. They 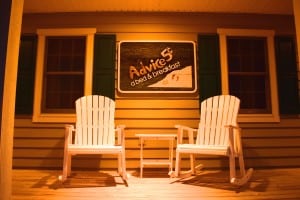 lived in Ithaca NY and were training for a marathon with 50 pounds of clothing to keep them warm in the winter. As New Years rolled around, they had to get out so Nancy said, “Let’s just go to Duck.”  They could not afford Sanderling at the time and couldn’t believe there was not a B&B, just houses to rent. They escaped a massive blizzard and stayed at the same place as before in Nags Head. Later during a stay in a Toronto B&B, Nancy hounded Donna about the idea of one in

Duck and she agreed it might be a good idea. In May of 94 they came down, found a lot, built and opened in Sept. – Advice 5cents. If you are looking for a quieter more exquisite setting, this fits the bill. Comfy quarters, rooms with a deck, and communal area upstairs make it a perfect getaway for singles, couples or groups. Donna decided to become an EMT and is now the Chief of the Volunteer Fire Dept in her tenth year. Nancy manages the B&B but is also a support lieutenant of the fire department and a town council member, having served on the task force for municipal incorporation when still a part of Dare 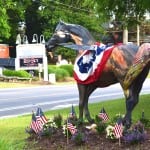 County. Now they are both big fish in the little Town of Duck, population 400 if you count full timers. In the summer it jumps to 25k. The Sea Pines swimming pool and tennis court are part of the B&B deal at Advice5cents; as is a short walk to the beach’s wild Atlantic waves or to town and the boardwalk. www. advice5.com

Sing it, “On the Bo-ardwalk, Boardwalk!” This unique walk over the water, along the shore of the sound skirts through a maritime forest with fox, deer and shops and restaurants along the 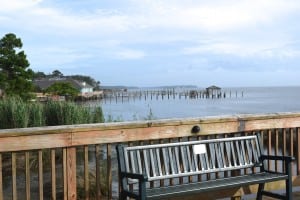 way. The Blue Point on one end is perfect for a sunset

dinner. John Power and Sam McGann serve farm fresh food like the beet salad with fennel and pistachio. Scallops were part of the lunch sampling and so sea sweet, they were for dinner again, not at all disappointing and light enough to be convinced to savor the desert combos. Their Crème Brule texture is like the 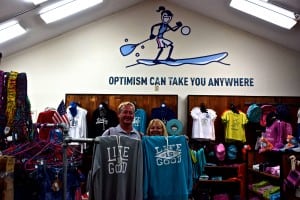 marshmallow in a s’more. The pecan pie has a very thin crust accompanied by bourbon ice cream, how Southern. Our waitress, Alison was a native. We asked
about the impending storm. She said, “Don’t worry, hurricane warnings are timely and tourists must evacuate. Locals may decide to stay or go.” She’s never left and never been harmed. www.thebluepoint.com

While dining over the water, the channel became a thoroughfare for what appeared 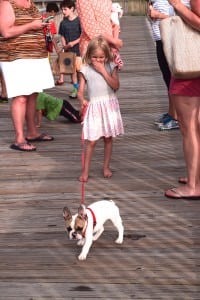 to be sea otters but in actuality it was nutria or as locals refer to them, water rats, brought from Russia for fur. The problem was, the rat didn’t need to grow fur in the warm outer banks as they did in Siberia, so rendered useless, they were let free. We hear they venture onto the links from time to time. One friend described nutria as a cross between a muskrat and a
german shepherd. The same NY friend bought a house there five years ago and rents it out when they aren’t there. They are beach people but they also love tubing down the sound waters. OBX pulls you in, grows on you and becomes a repeat destination. It makes you slow down a bit, it is the Outer Banks not the outer limits. But you can soar in 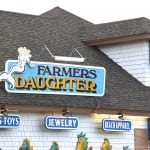 many ways – like learning to hang glide at Kitty Hawk Kites. This is where the
Wright Brothers first took flight after all.

There’s something about the multi story beach houses, the shops, the boardwalk, the isolation and the great golf that bring folks back to OBX. It is where everyone’s name is Ma’am or Sir and shore to shore, is fun galore. Look for OBX golf packages at PlayOBXGolf.com