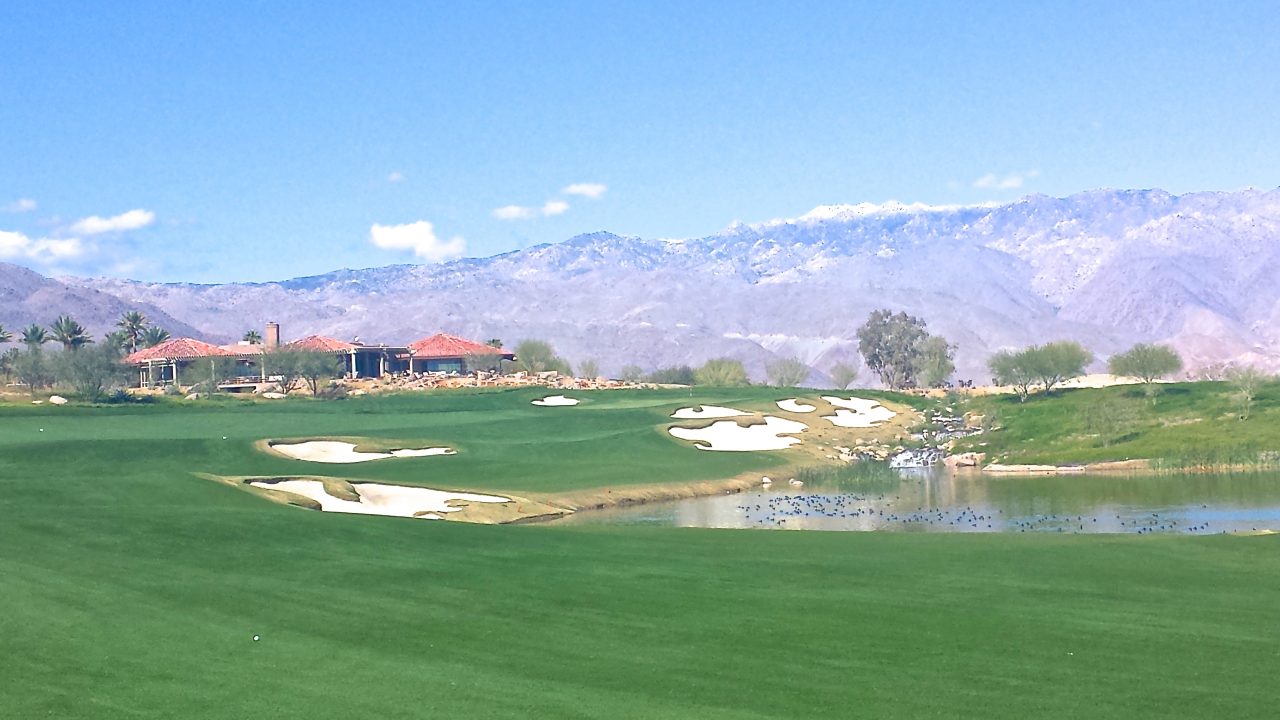 Rams Hill Golf Club in the Anza-Borrego Desert State Park is the talk of Palm Desert and San Diego, located between the two. It could be, along with La Casa 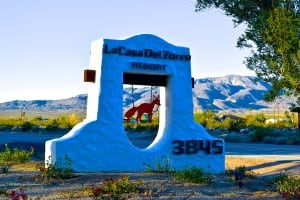 infrastructure was progressing. Crickmer seized the opportunity to sell in 1960 to publishing mogul James S Copley who renamed it La Casa Del Zorro, perhaps a code name for his secretary who became his wife. During their reign, referred to as the happy days, it was renowned as an escapist destination for the elite, drawing a list of who’s who from nearby to the Netherlands all seeking a secluded hideaway.

There is speculation that it could also have served the government, perhaps a bunker point since capacities of the laundry and maintenance facilities far exceeded that necessary to run even the largest of resorts.  The kitchen could prepare 1100 meals per day with only 150 seats. Further spurring the bunker myth, was the 1500 sq’ IT room built in ’60, during the Cuban missile crisis. And every Republican presidential candidate visited La Casa Del Zorro.  Why not follow the Greenbriar 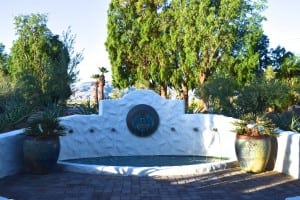 precedence with its bunker that now schedules guest tours? To date no one has found the button to any underground space, but the idea has yet to be debunked. La Casa Del Zorro is a place for plenty of pondering.

The Copleys eventually sold their retreat for city slickers to a prominent investor who spent approximately $10 million on upgrades to the facility, bringing it to a 5 star level and called it Borregos Springs Resort with the prospect of selling real estate around the Ram’s Hill Golf Club. Potential buyers were brought in to the resort for wining and dining and hopefully closing on real estate. The downturn in the economy and the real estate sales strategy proved to be too much. People feared the course would be abandoned.

Instead, it was resurrected and redesigned by Tom Fazio. Ram’s Hill is now an attractive draw for golfers from everywhere. Expansive views from the clubhouse and pro shop continue through all 18 holes of the beautiful layout. Set upon the hillside overlooking the valley, Fazio took advantage of the elevation changes in his array of up and down routing. Sloping fairways lead to par 3 greens beside innocent ponds, innocent until the balls roll in. Number four looks like an oasis with a pond to the left and palms in the distance. Look back from the green at snow covered mountains in winter or spring. Our round included funny weather – a wind tunnel, low clouds like a Gorillas in the Mist scene and then bright sunshine over desert mountains. Number ten’s view looked like a Thomas Moore painting. Fazio facilitates lower golf scores on this panoramic tract. Reasonable membership packages vary for singles, couples, and families. They are friendly and open to the public as well with great service and practice facilities. Insiders say, “Don’t tell anybody about this place. We

don’t want a big box bouncing in.” If you like to run to the Home Depot three times a day, it is not for you. The nearest is in La Quinta an hour and 15 minute drive.

It is however a superb place to get away from it all with a stay at La Casa Del Zorro. When times got tough, the Resort was ultimately shuttered for three years allowing the desert to reclaim it. Dust, snakes and arachnids filled the walls. During the closure the Borregans suffered. The school district went broke and closed; the bank went bust. 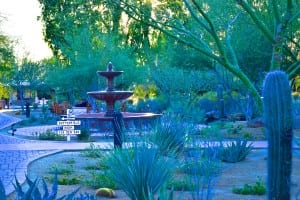 Alas, a new investor group bought the property.  Enter Patrick Sampson, the general manager brought in to revive this historic site and re-establish La Casa Del Zorro as a premier luxurious destination. He rehired many of the original employees with a passion to reclaim, reopen and recover the legacy of the once proud resort.  People like Dee who was referred to, as Miss America and Ruben, who bends over backwards with a 23-year career are happy to reengage. This is a place where generations of families gathered for vacation. Patrick relates the story of how before the dust was cleared, an old woman came crying into the lobby, shaking her cane and Patrick thought, oh no, she’s fallen and hurt but she raced to a table and tapped it with her cane exclaiming that her dearly departed had proposed to her right there 45 years ago. It’s that kind of heritage that Patrick 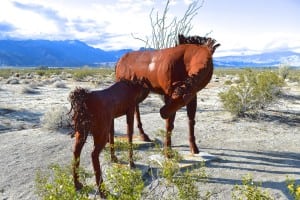 wants to perpetuate. His commitment resounds in his stories told with a South African accent. It will make you quiver.  It’s Liz who has the most stories though, (ghosts included) from her 35 years at Borrego Springs. “Here is where the Copleys sat. The Mrs. bought a live alligator that was on display until they gifted it to the San Diego zoo,” she shares and then sings through the restaurant as she attends to diners’ needs. She quipped, “They’ve remodeled everything but me.”

It’s a super surprise for the locals where the graduating class maxes out at 30. The Borrego Springs community is a close-knit family of generational ties yet welcoming to new inhabitants and/or visitors. Million dollar RVs park here for the winter to enjoy the vast landscape and dark skies. Throughout history, La Casa Del Zorro 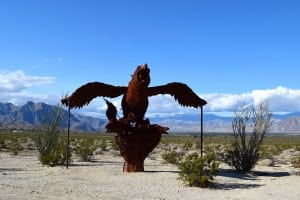 has welcomed guests seeking a retreat from the hustle and bustle chaos of San Diego and Los Angeles. Many families have made the trek an annual tradition. Foreigners travel in for the geologic splendor.

At 634k acres, the Anza-Borrego Desert State Park is one of the largest state parks in the United States and is largely untouched from when explorer Juan Bautista de Anza discovered the new land route into California. Mountain ranges on the north and west boundaries change colors with the passing sunlight throughout the day 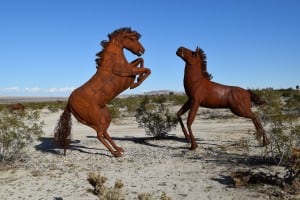 for a stunning show of nature. It is a totally unique landscape that induces serenity. In recent years, the vast desert has been dotted with more than 125 larger than or life-size metal sculptures by the “accidental artist,” Ricardo Breceda. They are surreal at first glance, maybe even confusing and then all consuming of interest, the perfect blend between nature and whimsy. The primitive welding art form of Mexico pays great tribute to the founding father. Two sculptures are posted at an entrance to La Casa Del Zorro. Throughout the resort hangs the

artwork of Peter Lik – photography embued with aluminum. The original mural of foxy friends in the Fox Den Bar entertains while raising a glass with human friends and family.

The library shelves feature books from the Copley’s personal collection and their own house is available on premise for $1500/night with 5 bedrooms and baths, tennis, pool, spa, the perfect quality space for quality time for a family or executive team to thrash out strategic 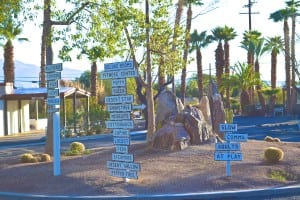 plans. Casitas may be rented for less and much more reasonable are the deluxe rooms within larger casitas, each named for flowers and set to the Four Seasons standards.  Little wooden signs with arrows, that one would expect at a children’s camp point the way to the casita groupings, 1-mile jogging path, fitness center and spa.

Don’t just tell someone to meet you at the pool because there are 26 throughout the property. We relaxed in the pool chaise lounges, soaked in the Jacuzzi and dipped in the pool. Beach balls were floating by so we volleyed and laughed. When

was the last time you did that outside of a concert hall?  Forget about electronics and forget about nightclubs. Families play golf and games. When Patrick first surveyed the inventory, he figured people don’t play games anymore. He got rid of the monopoly and board games only to have a request and had to repurchase.

Koi ponds and streams connect casitas to the lodge with 3 restaurant menus for all
three meals and all delish.  After dinner, the nightlife is about stargazing. A designated dark sky area with low light intrusion means naked eye constellation viewing without telescopes. Daytime is for golf or exploring Borrego Springs. 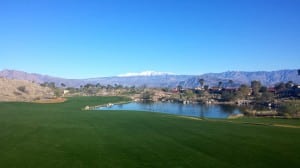 Borrego is Spanish for Bighorn Sheep. Look for them on the slopes just above the desert floor. It’s an indescribable beauty, this desert expanse. You have to see it to get it – all of it, Ram’s Hill, La Casa Del Zorro and the Anza Borrego Desert State Park. Golf and stay packages are available from $160. Get going at LaCasaDelZorro.com